Udinese 0-0 Inter Milan: Antonio Conte’s side drop points in the Serie A title race after goalless draw – and fiery Italian is SENT OFF at full-time following row with referee

Inter Milan missed out on the chance to go top in Serie A as coach Antonio Conte was sent off in a 0-0 draw at strugglers Udinese on Saturday.

The visitors travelled to Udine on a high after beating title rivals Juventus 2-0 last weekend but they couldn’t break down the determined hosts, who became the first team to keep a clean sheet against Inter in Serie A this season.

Inter striker Lautaro Martinez came closest when his first half shot drew a spectacular one-handed save from Juan Musso, but the visitors’ frustration showed when Conte was dismissed for dissent in stoppage time. 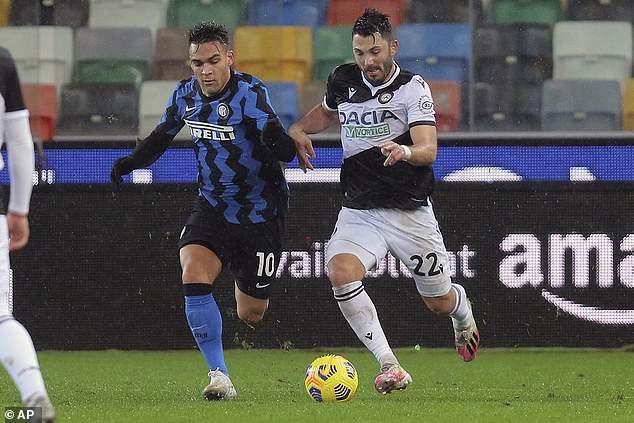 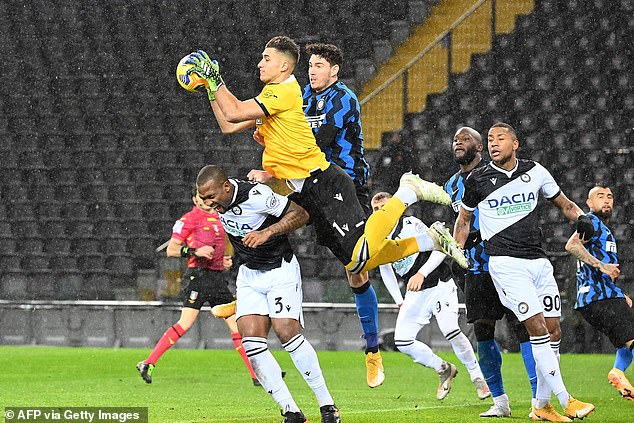 ‘We had a disagreement over the amount of stoppages awarded,’ Conte said.

‘The referee booked me and then chose to send me off. I thought four minutes weren’t enough, in the circumstances.

‘Then the referee makes his decisions and we have to accept them, even if we do not agree with those decisions.’ 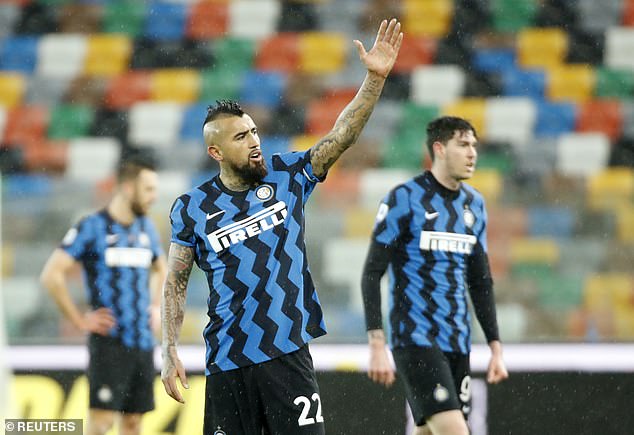 It was a frustrating night tor the Nerazzuri, they could have gone top of Serie A with a win 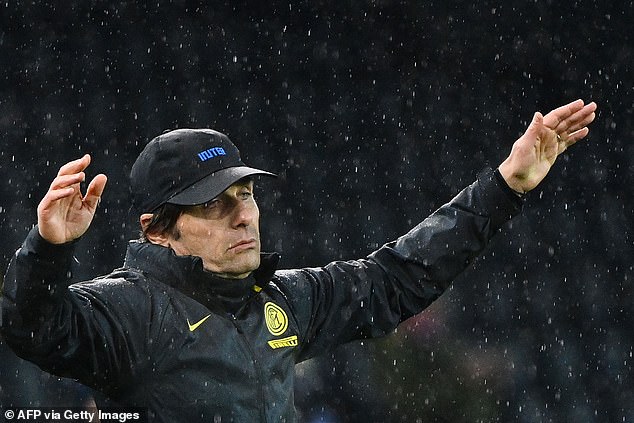 A bad day at the office for Inter boss Antonio Conte, he was sent off in injury time for dissent

Conte’s side remain second on 41 points, two behind AC Milan at the halfway stage of the season, while Udinese are 14th on 18 points but without a win in nine games.

Speaking after the game, Conte tried to ease frustrations that they did not capitalise on AC Milan’s defeat.

‘As I always say, we need to think only of ourselves,’ he told Sky Sports Italia.

‘We mustn’t think about Milan and their defeat.

‘We just have to focus on improving our performances and results.’

When quizzed on what he has made of Inter’s performances in the league, Conte was not interested in sharing his thoughts.

“I prefer others to do that, we just try to work and get the best out of ourselves,’ he added.

‘I think that amid the many, many difficulties we had this year, Inter are having their say and are protagonists of the campaign.

‘Inter deserve that for their history.

‘The second half of the season is still to play, but what we’ve done for the last year-and-a-half has been wonderful, aside from the difficulties that people often don’t realise are there.’

Next up for Inter are neighbours and league leaders Milan in the Coppa Italia quarter final on Tuesday.

Meanwhile, Udinese travel to Spezia for a crucial Serie A match in their fight against the drop next Sunday.