‘If you’ve printed out an itinerary, throw it away,’ says Adam, the trip leader of Oceanwide Expeditions’ Hondius ship, as we gather for a briefing en route to the world’s largest desert – Antarctica.

The initial plan for the ten-day expedition has changed, he says, and now we’ll venture below the Antarctic Circle, something that most polar ships tend to do only once a year.

As Antarctica is the windiest and coldest continent on Earth, voyages, we are told, can change at the drop of a woolly hat. After hitting 66.5 degrees south of the Equator, the rest of the cruise schedule will be dependent on the weather. 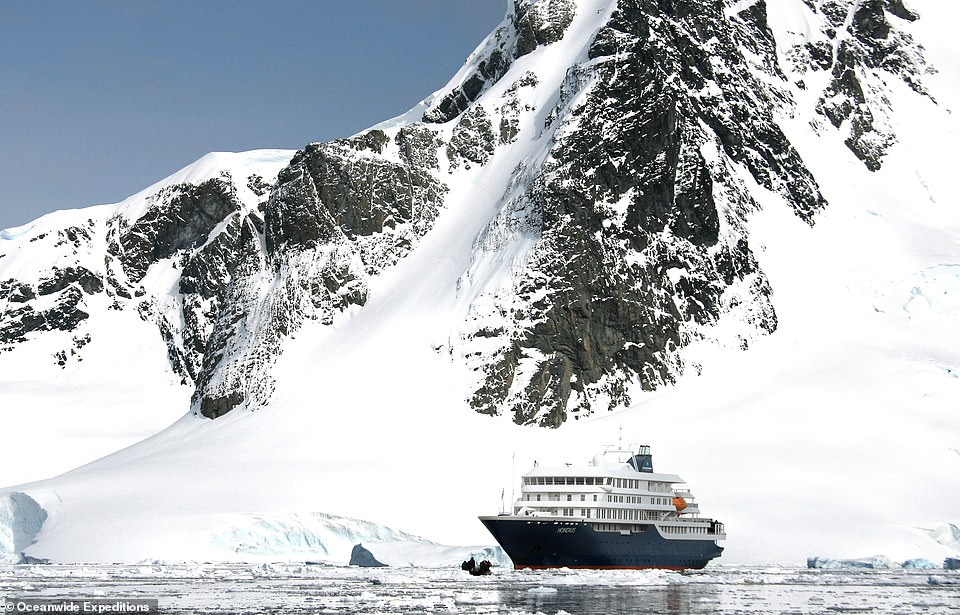 The Hondius expedition ship, dwarfed by a mountainous Antarctic landscape

Adam adds: ‘Don’t rush, take your time and enjoy where you are. This is one of the most expensive places to go on holiday and we’re going to places few people get to go.’

There’s a smorgasbord of well-travelled passengers aboard the Hondius. One woman, an artist from Maryland who is with a friend (as her husband doesn’t like adventurous travel), muses: ‘This ship is like a floating United Nations.’

Her observation is spot on. The trend for not waiting a moment longer to take trips of a lifetime is evident. A cocktail of multilingual passengers range from young honeymooners to retired doctors, tech entrepreneurs and a member of airline cabin crew who fancies going somewhere not on her flightpath. 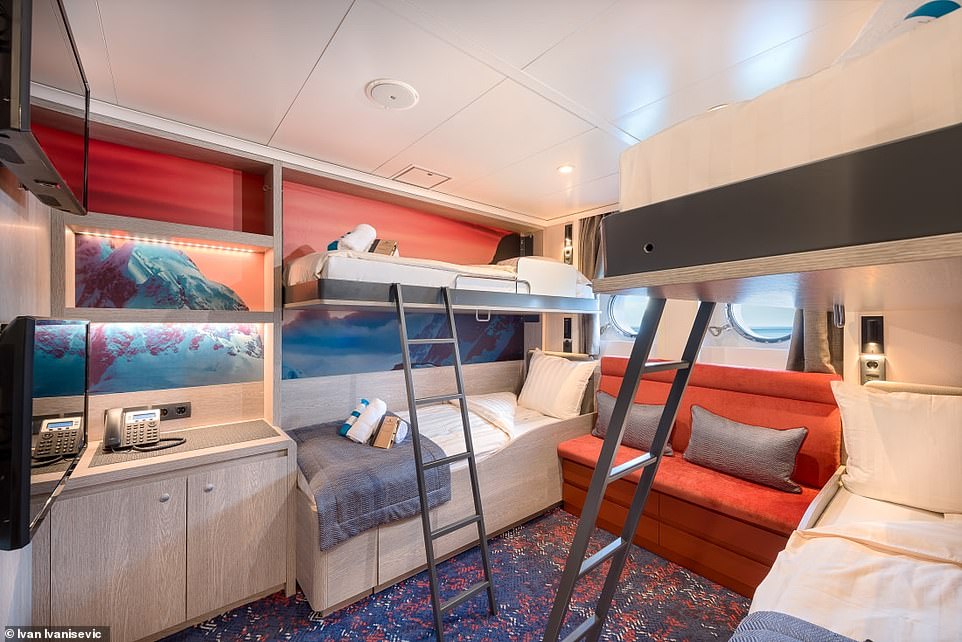 A quadruple porthole cabin onboard the Hondius, which sails to the Antarctic from the colourful Argentinian port of Ushuaia 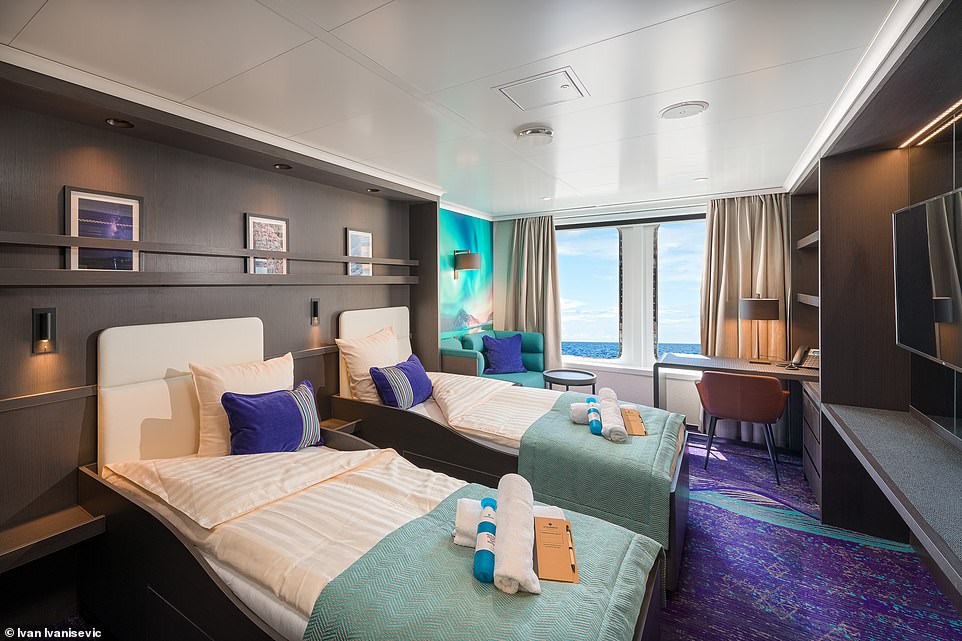 A twin deluxe cabin onboard the Hondius, which in normal times sleeps 170 passengers in 80 cabins 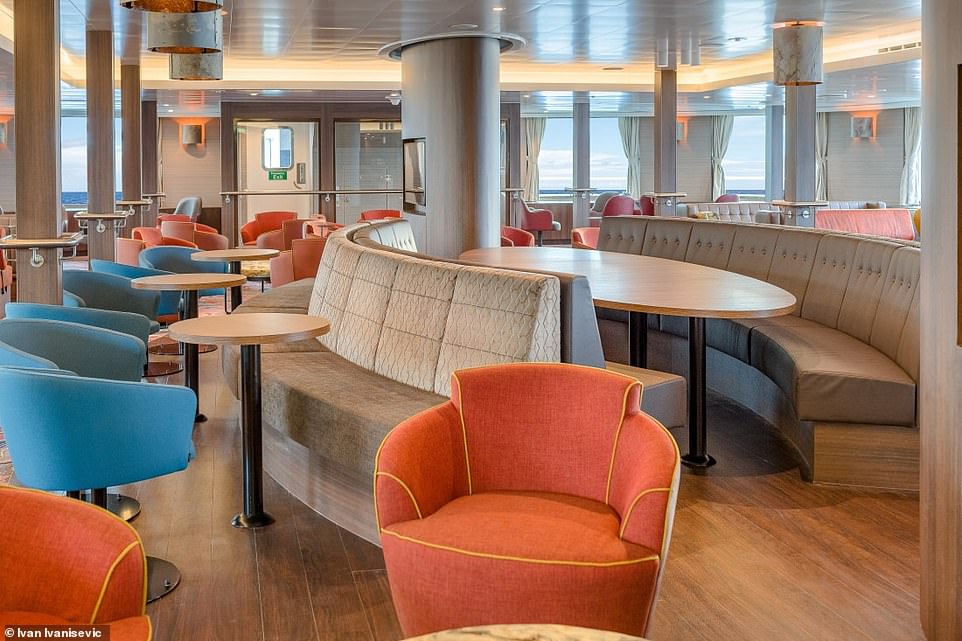 The Hondius’s inviting observation lounge. Oceanwide Expeditions describes the Hondius, which was built in 2019, as ‘among the most structurally fortified and technologically advanced polar cruise ships on the seas’ 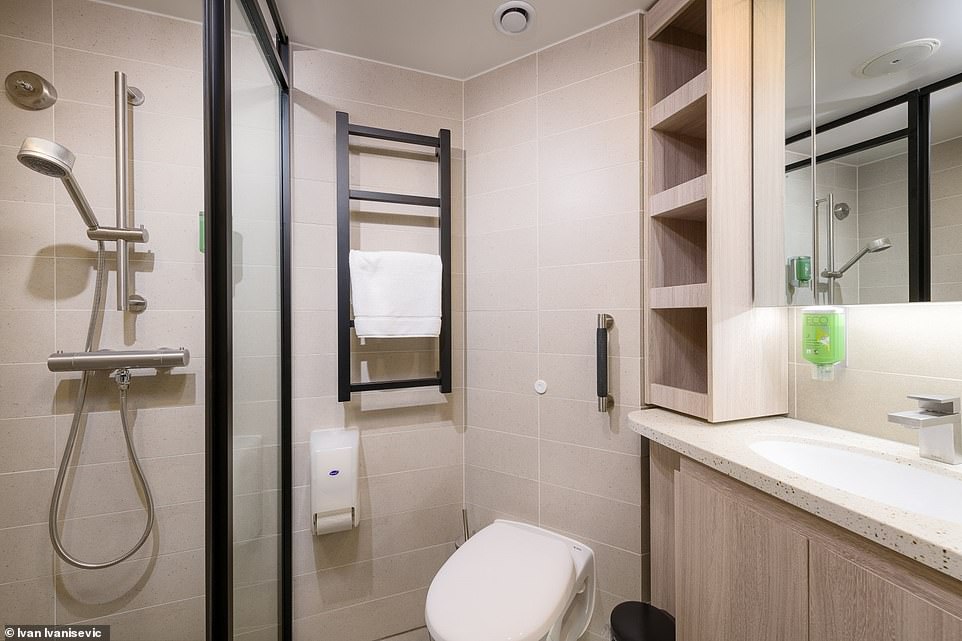 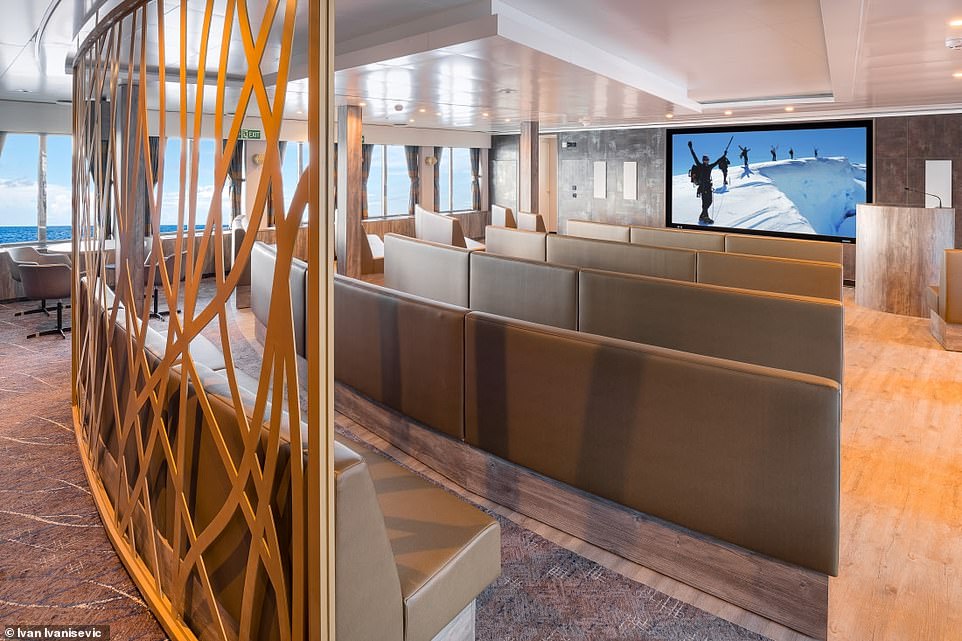 The Hondius lecture room, where experts give informative talks to passengers

One thing that’s a certainty when it comes to Antarctic itineraries – if leaving from the colourful Argentinian port of Ushuaia – is that you will cross the Drake Passage. The stretch of water below South America’s Cape Horn is considered one of the planet’s roughest. It requires strong sea legs to get through it – which it turns out I seem to possess – but many of the Hondius’s passengers are wiped out by seasickness and confined to their beds for the two-day crossing.

But the cabins aren’t a bad place to be, with modern interiors, snuggly duvets and David Attenborough TV shows on loop.

With 32 fewer passengers than expected due to the pandemic, I decide to upgrade from a shared quadruple room with three sisters from Germany to a double cabin of my own, where there’s more space to sprawl and bigger windows. 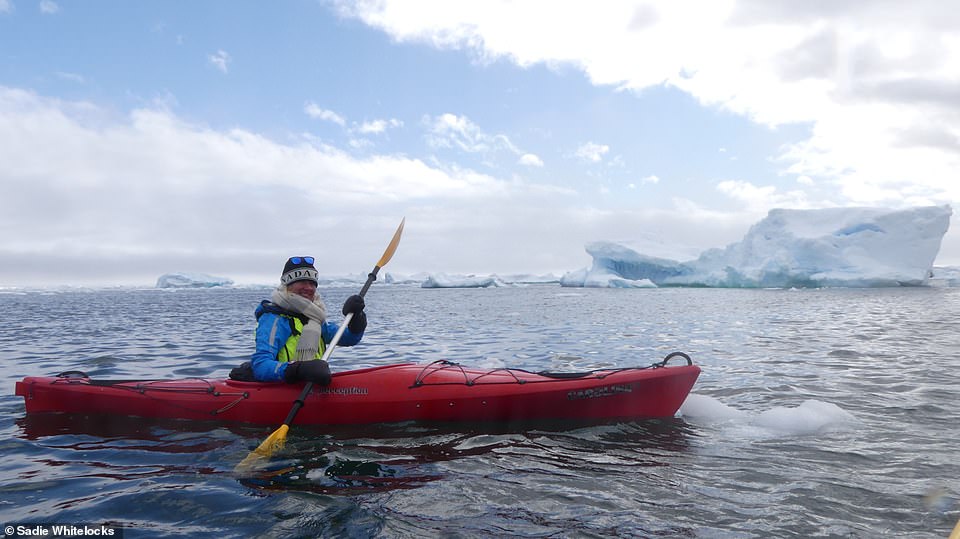 Sadie signed up for Hondius’s kayaking programme and says that the first outing (pictured) felt ‘quite surreal’. She describes how she peacefully paddled among ‘glistening chunks of ice with seals and penguins popping up to say hello’ 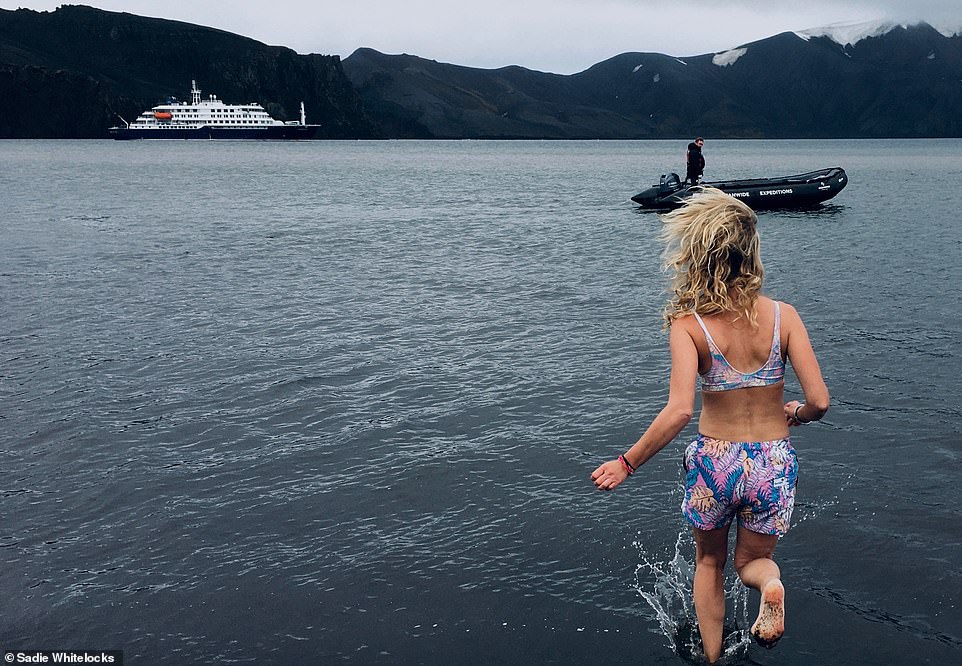 Our voyage through the Drake Passage isn’t too ferocious, and by day four we cross the circle and go on to make our first landing, zipping to the snow-dusted shores of Detaille Island on small inflatable boats. I’ve signed up for the ship’s kayaking programme and our first outing feels quite surreal, peacefully paddling among the glistening chunks of ice with seals and penguins popping up to say hello.

Being slightly later in the summer season, the weather during our trip is temperamental. The overnight camping trip is cancelled and violent gusts of wind prevent us from kayaking on a couple of occasions.

Informative lectures are scheduled instead. Expedition staff do note that global warming is a concern, with less snow than in previous years. Indeed, while we are away, the hottest temperature ever on the continent is recorded, at 18.3C (65F). 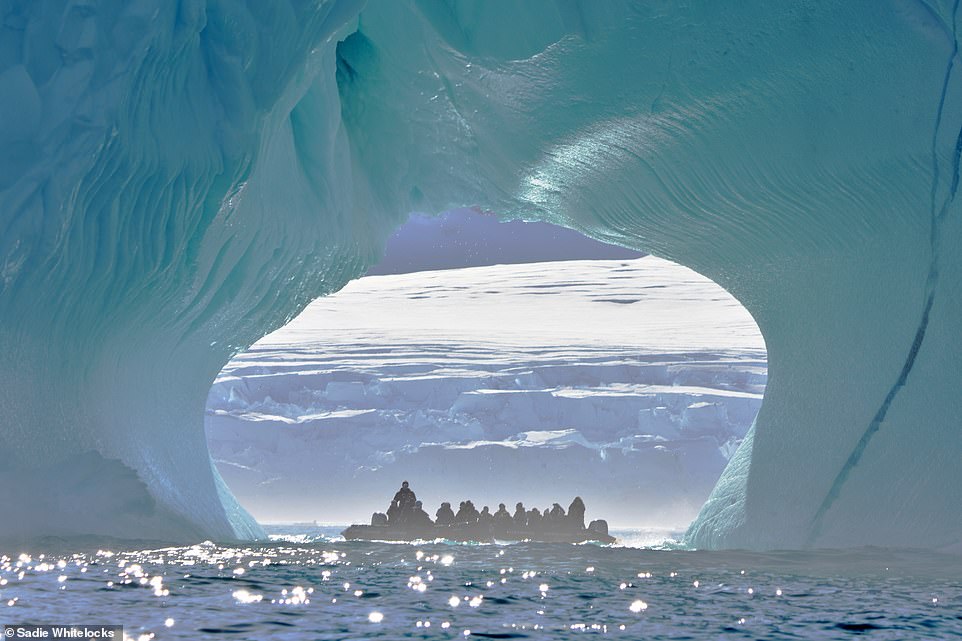 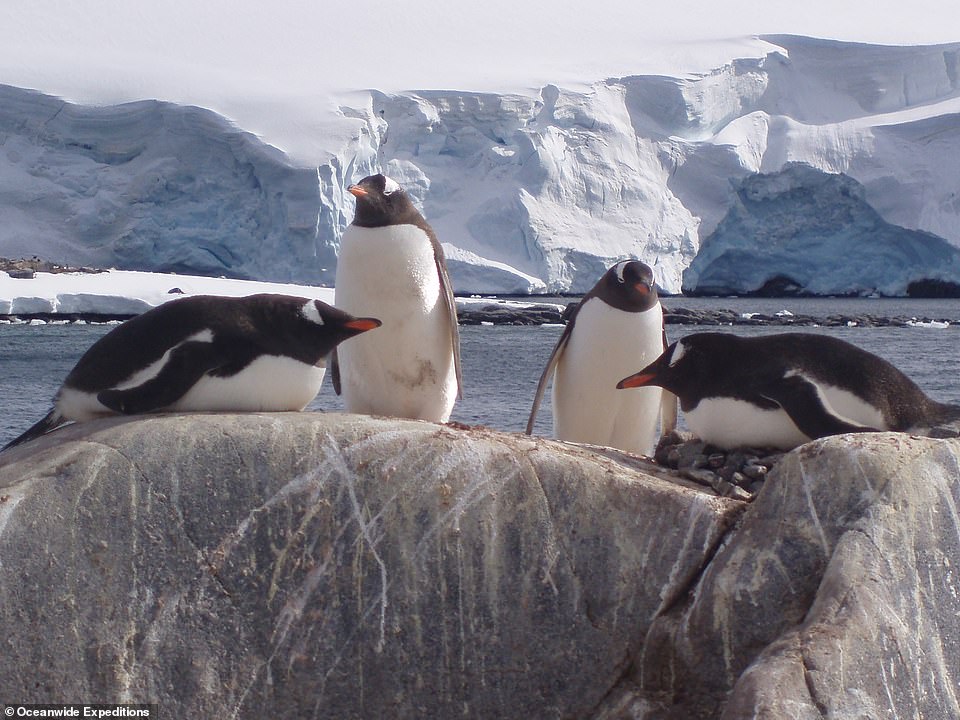 Gentoo penguins, which are found on many of the islands in Antarctica 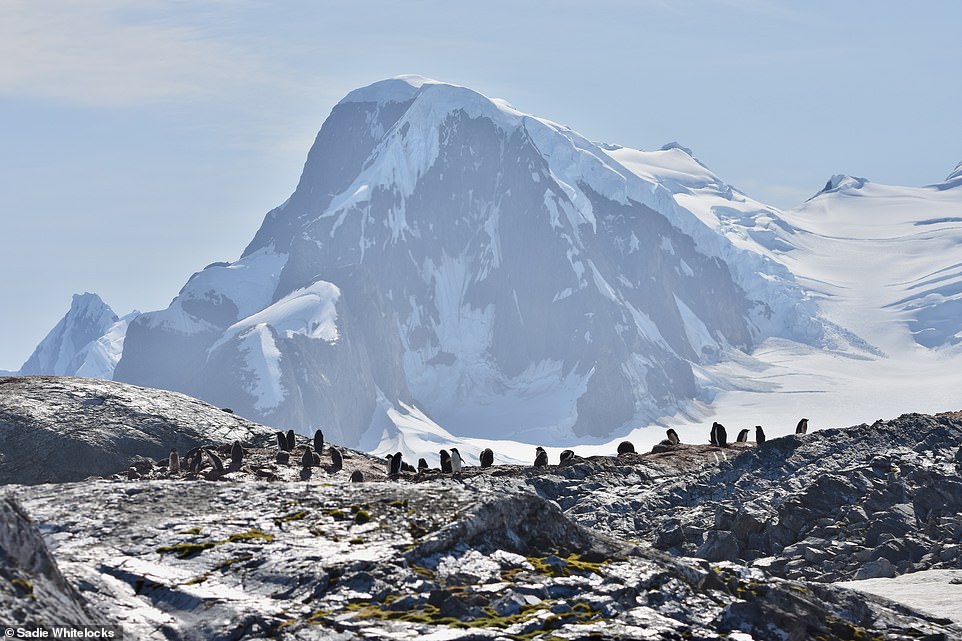 Penguins nestled on a rocky hillside, with mountains beyond serving as a breathtaking backdrop 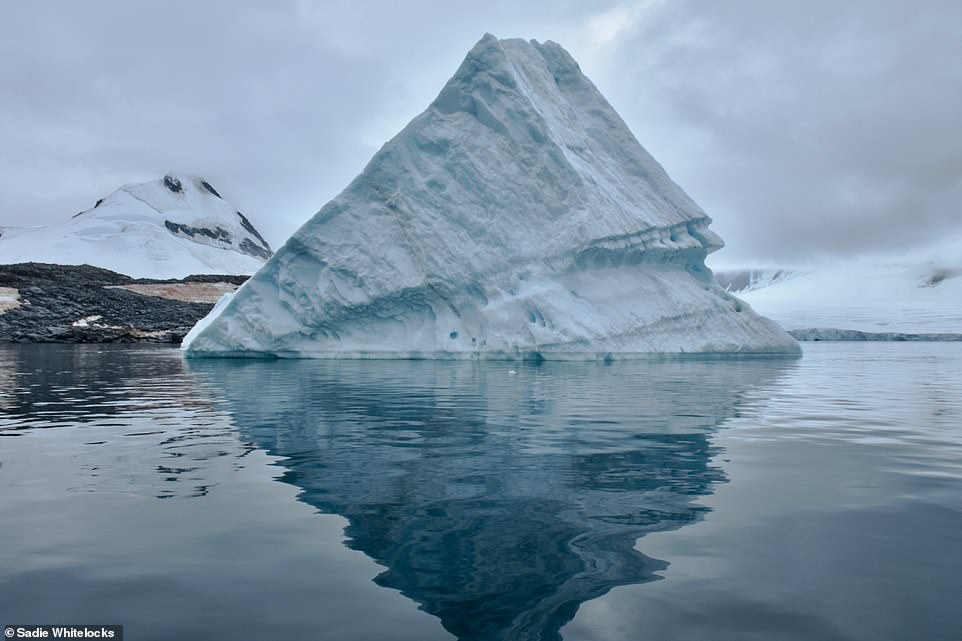 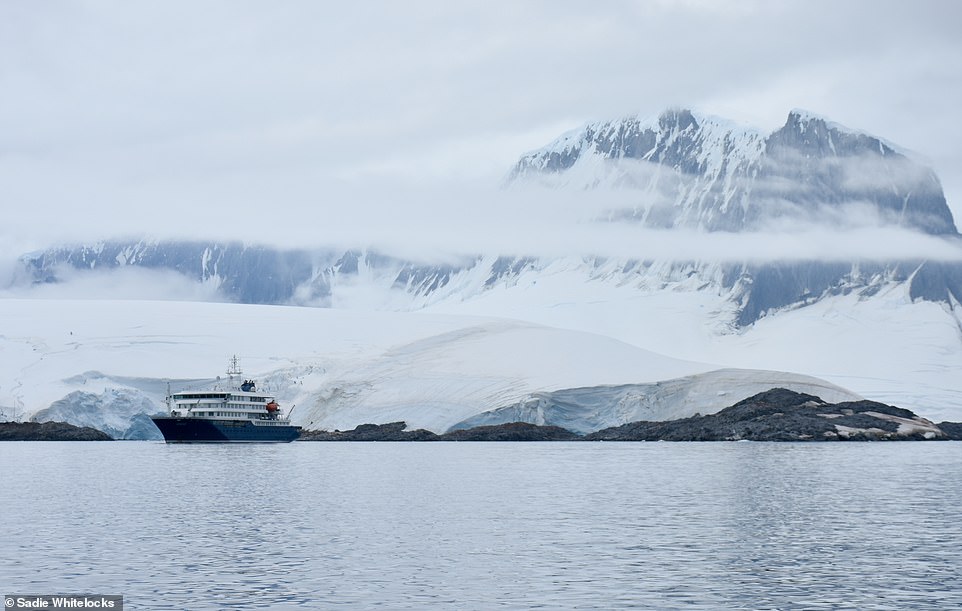 Sadie writes: ‘One [Hondius] staff member tells me that wildlife-watching and getting passengers on land is the main priority with Oceanwide trips, not glitzy ship facilities and Michelin cuisine.’ Pictured is the Hondius during Sadie’s expedition

Oceanwide Expeditions’ Antarctic trips are set to resume in October. The Discovery And Learning voyage starts from £5,240, excluding flights. British Airways runs regular flights from London to Buenos Aires in Argentina with connections to Ushuaia with local carriers (oceanwide-expeditions.com).

I hear passengers deliberating over whether they are contributing to this by cruising to Antarctica on a fuel-guzzling ship, but the Hondius’s green credentials help lessen their guilt.

The ship, which launched in 2019, is decked out with tech to keep down fuel consumption, and food waste is minimised by the fact that the breakfast and lunch buffets are open only for one hour while dinner choices are made during the day, so the kitchen knows exactly what it’ll be serving up later. One staff member tells me that wildlife-watching and getting passengers on land is the main priority with Oceanwide trips, not glitzy ship facilities and Michelin cuisine.

That said, the deliciously varied mix of food is a real plus. From pheasant and pork liver parfait to vegetable strudel and perfectly glazed creme brulees, the innovative menus prove a daily highlight. In fact, one day when we see a humpback whale frolicking with its calf outside the dining-room window, I am the only one at my table to venture out as the others refuse to abandon their fluffy breakfast pancakes.

This is just one of many goosebump-inducing wildlife encounters during the trip. Others include stumbling across Antarctica’s rare Ross seal, seeing four species of penguin and ditching happy hour at the bar when a playful pod of orcas appears.

History buffs will appreciate a stop at Antarctica’s oldest British base, Port Lockroy, which now serves as a post office for tourists and researchers working in the region, and a visit to an abandoned whaling station on Deception Island with its derelict carcass eerily emerging from the fog. When we stop on the island, I opt for a ‘polar plunge’ along with about 15 others. A hot toddy back on board helps me to regain feeling in my frosted fingers and toes.

We end things as we started, with a crossing of Drake Passage.

With a clink of glasses at the captain’s farewell cocktail party, the consensus is that crumpling up the itinerary and relishing the adventure had served us very well.