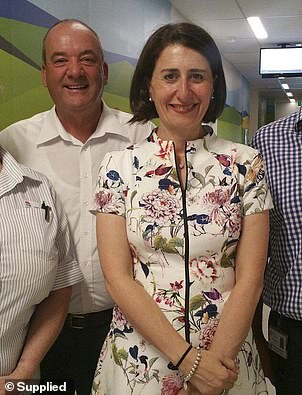 Secret affair: Premier Gladys Berejiklian with her clandestine lover Daryl Maguire during a visit to Wagga Wagga Base Hospital

Daryl Maguire was a ‘nobody’ to most Australians before he was outed as Gladys Berejiklian’s secret ex-lover and the target of a corruption investigation.

But the ex-MP, 61, has long been a figure of power and wealth in his home city of Wagga Wagga, with the 50,000-strong town left divided over his sudden fall from grace.

The father-of-two held a stranglehold over the local state Parliament seat for just shy of two decades after giving up his Harvey Norman franchise for politics.

Maguire catapulted into the hallways of power in 1999, boasting strong support from local businesses, and held on through five elections.

Meanwhile, he appeared to accrue significant wealth, boasting six properties, at least three of them in Wagga, including a 15 hectare, four-bedroom country estate he is believed to call home.

When the Coalition finally won government after four consecutive Labor premiers in 2013, he found himself a cushy position. Maguire was appointed a parliamentary secretary, chair of the Friends of the Asia-Pacific committee, and, eventually, Premier Berejiklian’s clandestine lover.

But as evidence before the ICAC showed last week, it was a house of cards. 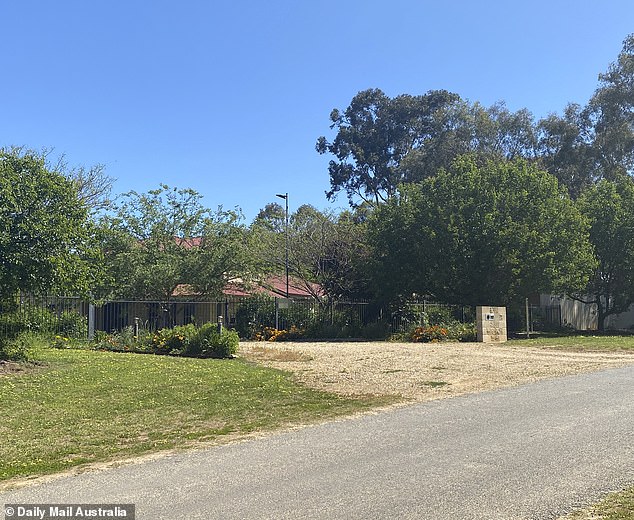 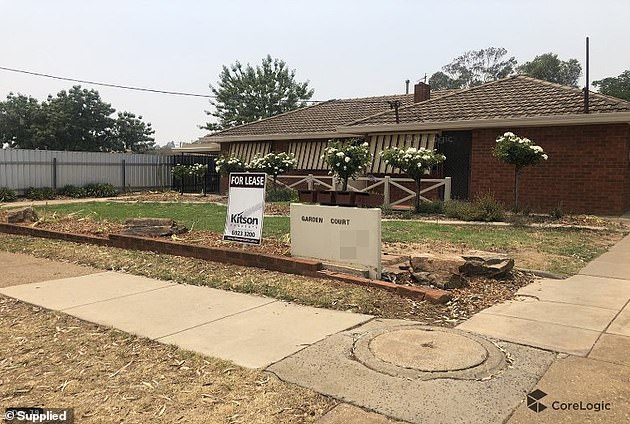 Daryl’s empire: One of two neighbouring red-brick homes Maguire owns in Wagga Wagga itself. A unit was on the market for $185 a week earlier this year 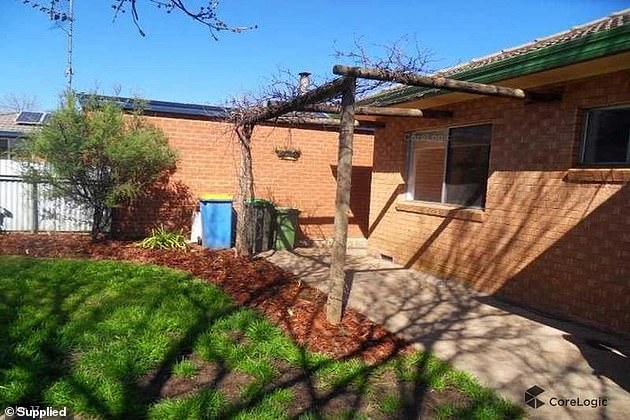 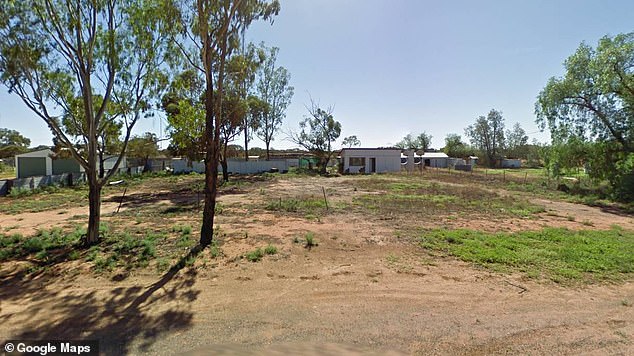 A patch of red dirt in Ivanhoe, in the state’s far west, is also part of his portfolio. He purchased it for $8,000, property records show

Maguire has been ousted from politics and his former boss Gerry Harvey said he has also been ruined in business.

His future is uncertain – although he is still supported by an $80,000-a-year parliamentary pension.

The scandal over Maguire and the popular Premier has sparked a mixture of rage, condemnation and sympathy from those who knew him in Wagga Wagga.

Locals were full of gossip when Daily Mail Australia visited at the weekend, but there was no sign of the ex-MP despite him giving evidence to ICAC.

One local was so fed up with media storm he brandished a baseball bat at reporters – but most were more subdued.

Some said Maguire ‘deserves a chance’ while others argued he should be punished over his admission to ICAC that he used his parliamentary position for private gain.

Jodie Parmenter, a neighbour, said: ‘My opinion is that to be in politics you have to be squeaky clean – because if you’ve done anything wrong they’ll find it.’

But her friend Nola Crouch – who has lived in Wagga for 32 years – expressed some sympathy for the former local MP.

‘Being in debt himself, it looks like he’s tried to get himself out and made a mess in the process,’ she said.

The ICAC last week evidence Maguire was determined to clear his debts before his planned retirement from politics in 2019.

He complained of having a $670,000 mortgage plus $1.55 million in business debts and the inquiry heard how he hoped to pocket about $1.5 million from his role in a land sale at Badgerys Creek, the site of Sydney’s forthcoming second airport.

Ms Crouch said: ‘I feel for him though. Everyone deserves a chance, and he’s done good for the area in the past.

‘It’s just a shame he’s got himself into this mess but we’re sick of hearing about it now.

‘Leave him alone, what is done, is done. He can’t take it back.’ 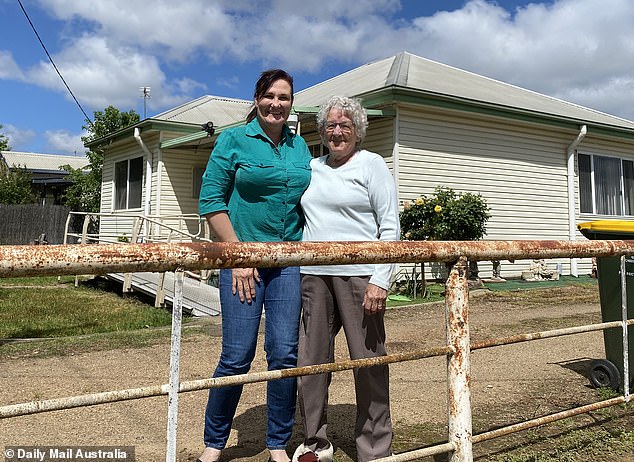 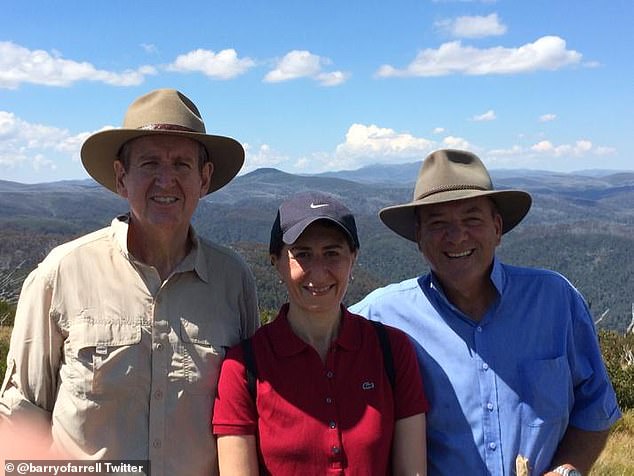 Berejiklian was a long-time friend of Maguire’s (together on right, with former Premier Barry O’Farrell)

But Ms Crouch admitted she was in disbelief that he managed to keep his relationship with Berejiklian so private.

The ICAC has heard a friend of Maguire’s socialised with the pair in Wagga on a number of occasions.

Karen Barbey – who met Maguire while he ran Harvey Norman – said she could recall having dinner with the Premier at his house as well as at the boisterous local pub, Romano’s.

‘What was the function you met the Premier at?’ an investigator asked, according to documents before the inquiry.

‘There was one at the – one near the underpass. (I) met her there and I met her at Daryl’s place,’ Ms Barbey recalled.

‘We had dinner at night as well and I’m trying to think… oh and we went to Romano’s for dinner one night.’

Staff at the pub were tight-lipped about their famous patron when Daily Mail Australia visited, but one regular, who declined to be named, didn’t mince words. 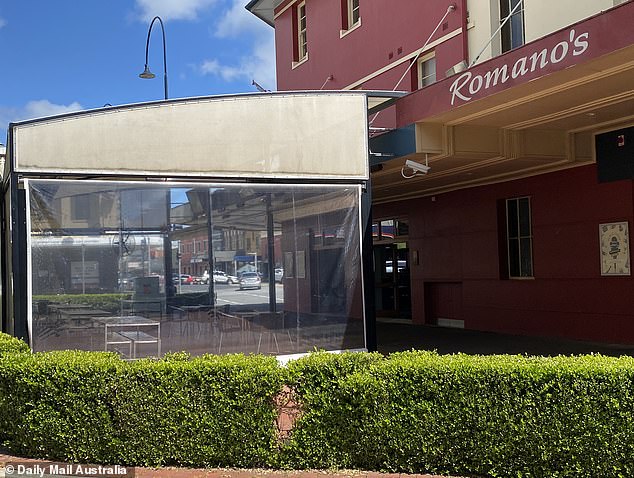 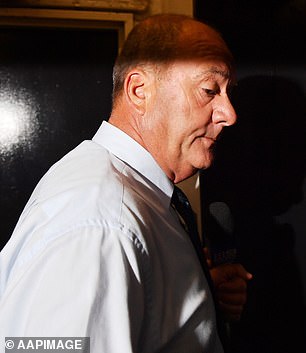 A glum Maguire faces a media gauntlet outside the ICAC last week. He gave evidence over three days

‘Mr Maguire needs to learn from his alleged corrupt dealings,’ the patron said.

‘This … paints the premier in a terrible light.

‘Although we don’t know the extent of what went on and how much she knew about it … her position is untenable.’

The Premier is still hanging on, giving a series of interviews on Monday – one in which she admitted shedding tears over the events of last week, and another where she confessed to being in love with Maguire, but never counting him as her boyfriend.

In Maguire’s maiden speech, he said: ‘When I travel the electorate I am captivated by its beauty, blinded by its potential and passionate for its cause and its people.

‘But to truly understand my home and the diversity of the electorate you need to live it, to breathe it, and to feel it.’

It seems he will have a lot more time to do just that.

Gladys Berejiklian: I was in love with Daryl Maguire but he WASN’T my boyfriend

Gladys Berejiklian has revealed she was deeply ‘in love’ with Daryl Maguire and had dreams of marrying him, but never considered him to be her boyfriend.

The New South Wales Premier did the rounds on Monday morning, first chatting with Ben Fordham and later on the Kyle and Jackie O Show to bare all about the ‘close personal relationship’ she shared with the disgraced former MP.

Ms Berejiklian has struggled to put a label on their relationship since she was called to give evidence at an Independent Commission Against Corruption inquiry.

When Fordham asked why she never spoke to her family or friends about a man she was supposedly in love with, Berejiklian said she was hesitant to share her feelings without knowing that the relationship would last.

‘It wasn’t a normal relationship, he wasn’t my boyfriend. I certainly hoped he would be, but it wasn’t sufficiently substantial. I didn’t want to introduce anyone to my close network unless I knew,’ she said.

‘I was certainly in love with him… but no, he wasn’t my boyfriend.’

Over on the FM dial, Ms Berejiklian also dispelled Kyle Sandilands’ theory that she was a lesbian.

Responding to Sandilands’ question about whether she had ever ‘dabbled’ in a same sex relationship, Ms Berejiklian said: ‘I haven’t and I didn’t. Not that there is anything wrong with that.’

Sandilands said he understood why she’d want to keep the relationship private, given ‘secret sex is the best sex’, but the premier was hesitant to comment on the intimate details of her former relationship.